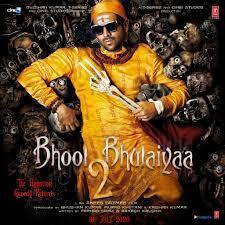 BHOOL BHULAIYA 2 - KARTIK AARYAN DID IT?

WAS IT WORTH IT?

THE MOVIE STARRING KARTIK ARYAAN. it is more than a movie, it is the battle between its first and the second part as everybody has been comparing it as the first part of the movie was starred by Akshay Kumar and everybody has the imagination of his character till now as he did a phenomenal acting in the movie

Akshay Kumar and Kartik Aryan are being compared.

Everybody expects it should have been Akshay Kumar rather than Kartik Aryan. But believe me he did best to do the part as the character was displayed.

Bollywood directors can stun you with their perseverance. In 2007, Anees Bazmee had his biggest hits, Welcome, a formula he’s since tried (unsuccessfully) to recreate. Akshay Kumar, the star of Welcome, had two other comedy hits that year: Heyy Babyy by Sajid Khan, and Priyadarshan’s Bhool Bhulaiyaa. With not much left, Anees made a grab at Bhool Bhulaiyaa 2.

The director knows how vividly the original is burned in our memory. Priyadarshan, remaking the classic Manichitrathazhu, brought out the gags: I remember friends cracking up just by saying ‘gotti’ or ‘chote pandit’. Akshay was at his funniest. The film’s soundtrack—composed by Pritam—accompanied performances and visarjan dances alike.

…that was then. In Bhool Bhulaiyaa 2, we have Kartik Aaryan trying to ape Akshay’s toothy grin. We have songs that sound decidedly AI-made. We have Rajpal Yadav, unforgettable as the aforementioned ‘Chote Pandit’, playing a ghost of that character. Ever revisited your childhood home, and found your old toys and wall scribblings irredeemably defaced? Bhool Bhulaiyaa 2 is that feeling.

Some plot if you care. Having met at a pit stop, travellers Ruhaan (Kartik) and Reet (Kiara Advani) head off to a music festival. The bus they didn’t board falls off a cliff. Reet’s family, hear the news and fall into mourning

In the meantime, Reet finds out that her fiancé and younger sister are in love. She hatches a plan: she’ll hide out in the ‘old haveli’ of her Rajasthan home while Ruhaan convinces everyone to marry the lovers. Is it this same haveli where a Bengali-speaking, ghungroo-rattling witch Manjulika is trapped? You bet.

Anees, as always, tries his best to tickle the audience. Not all of it is in vain. Writers Farhad Samji and Aakash Kaushik ensure there are enough cheap laughs to play a matinee crowd. But the key to a good horror-comedy is patience. The first film, worked up enough suspense before letting out the laughs. In Bhool Bhulaiyaa 2, humour, horror, silliness, and histrionics occupy a muddled space.

Nostalgists! Get lost in the world of Bhool Bhulaiyaa 2. And emerge a loser.

Kartik Aryan is one of the emerging stars in this industry we should support him , his other movies

I am a full time blogger and want to travel all around the globe. I want you to join me in this beautiful journey. Doing M. Sc in English literature from St. Stephens college.

I am a full time blogger and want to travel all around the globe. I want you to join me in this beautiful journey. Doing M. Sc in English literature from St. Stephens college.

BHOOL BHULAIYA 2 - KARTIK AARYAN DID IT?